While the youth smoking rate has now dropped to a record low of 6 percent, that number does not tell the whole story. Tobacco use disproportionately affects many marginalized populations—including people in low-income communities, racial and ethnic minorities, LGBT individuals and those with mental illness—who have a long and documented history of being targeted by the tobacco industry.

Here are a few of Big Tobacco’s efforts to appeal to low-income consumers: At different points in the past 60 years, they have handed out free cigarettes to children in housing projects, issued tobacco coupons with food stamps, and explored giving away financial products like prepaid debit cards.

The impact of the smoking rate disparity has far-reaching consequences. A 2016 report on the economics of tobacco from the U.S. National Cancer Institute and World Health Organization stated that, “tobacco use accounts for a significant share of the health disparities between the rich and poor” worldwide. 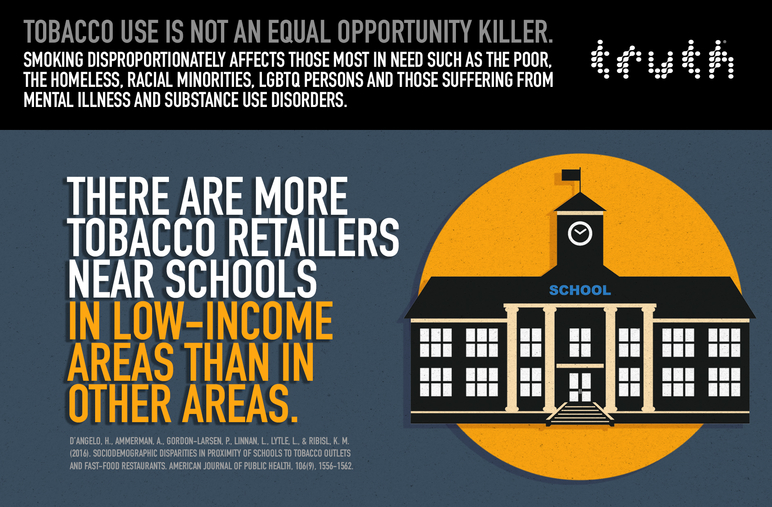 Low-income communities are valuable consumer bases for the tobacco industry.

Low-income neighborhoods have denser concentrations of tobacco retailers and therefore face more exposure to point-of-sale marketing, which Big Tobacco spent a total of more than $8 billion on in 2014. Point-of-sale promotions—not just in-store advertising, but things like discounts and product displays behind check-out counters—have been the industry’s top marketing strategy for nearly 30 years, receiving even more investment after the 1998 Master Settlement Agreement restricted marketing tactics, such as billboard and transit ads and the use of cartoons such as Joe Camel to appeal to children.

Across the board, the industry spends massive amounts of resources to keep prices low. The industry spent $7.3 billion in 2014 on discounts and coupons alone to lower prices. It also spends millions to fight against cigarette tax increases. For example, Big Tobacco raised more than $71 million in 2016 to campaign against California’s ballot initiative to raise the cost of cigarette packs by $2 to an average pack price of $5.53. (The ballot initiative passed.)

Discounts, coupons and working to prevent tax increases threaten to counteract the impact of raising the price of tobacco products, which is one of the most effective ways to drive down the smoking rate, especially among young people. For example, raising the cost of cigarettes to $10 per pack—the U.S. Surgeon General’s recommended price—would result in 4.8 million fewer smokers between the ages of 12 to 25 years old. Today, the average price of cigarettes is only about $6 per pack.

Tobacco disparities along socioeconomic lines have not always existed. For example, the smoking rate was higher among those with more years of education in 1940, before the health effects of smoking became widely known and before the industry started targeting low socioeconomic individuals.

Today, there is a stark socioeconomic contrast.

People earning the least money are also the most likely to keep smoking once they start. Even though smokers below the poverty line attempt to quit at the same rate as those who earn more, they successfully quit at a lower rate.

While overall smoking rates have declined across the country, the pace of progress is significantly slower or nonexistent depending on where people live and work.

Data from 1996 to 2012 found that the smoking rate “varies dramatically” between counties, even in the same state, and are significantly different between higher-income and lower-income counties.

Given the higher rate of smoking in these communities and workplaces, low-income individuals also face higher exposure to second-hand smoke. For example, 35 to 45 percent of children living in households below the poverty level live with a smoker.

For more information on the disproportionate effect tobacco has on certain populations, including racial and sexual minorities and those with mental illness, read the Achieving Health Equity report.

TAGS: socioeconomic status the truth about