The economics of tobacco: What if a pack of cigarettes cost $10?

Economics tell us a lot about tobacco use. People who earn less than $20,000, for example, are more likely to smoke. The same can be said of people who do not have a high school diploma, those who live in a low-income neighborhood, and people who work a blue-collar job.

Each of these economic factors is associated with a higher likelihood of smoking. They also make people more likely to die from a smoking-related disease. Projections say that about one in five smokers, and one in three youth and young adult smokers, may die early from tobacco-related illnesses.

While economics plays a big role in determining smoking rates and deaths, it could also be part of the solution. Pack-a-day smokers spend an average of $2,193 a year on cigarettes. What would happen if the cost of a pack increased? In 2014 the U.S. Surgeon General recommended that an individual pack of cigarettes should cost $10. Today, the average price is about $6.00. What if we were to hit the Surgeon General’s target price?

About 1.5 million U.S. youth and young adult lives would be saved from early deaths if cigarettes cost $10 a pack, according to a recent study in Public Health Reports.

But that’s just part of the story. That’s because of discounting, one of the tobacco industry’s most popular marketing strategies. In 2013, cigarette and smokeless tobacco companies spent $7.6 billion—80 percent of their total U.S. advertising and promotional expenses—on discounts to tobacco outlets to reduce the price of cigarettes.

By increasing prices to $10 and eliminating discounts, we could cut the number of smokers aged 12 to 25 years old by 4.8 million fewer smokers. That would reduce young adult smoking by more than 12 percent and youth smoking by nearly 3 percent. 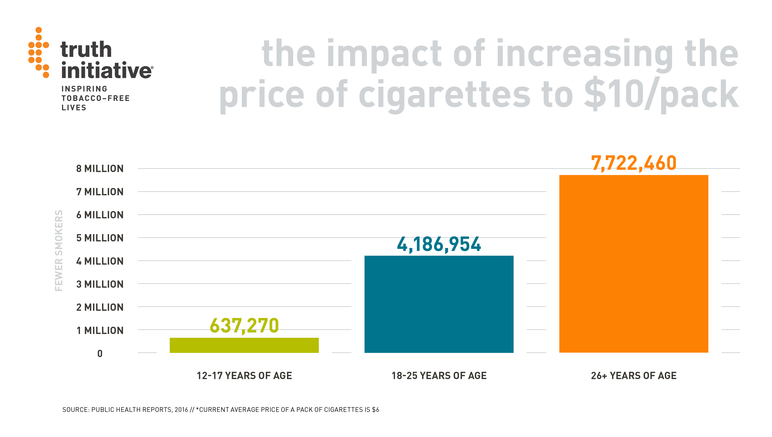 If discounts were allowed on $10 packs, the rate would still drop, but not as much. Eliminating discounts on the $10 price would result 680,000 fewer smokers, compared to allowing discounts. Underscoring the importance of cost, however, even a $0.94 federal tax increase on cigarette packs proposed in the president’s 2017 budget would reduce the smoking rate. 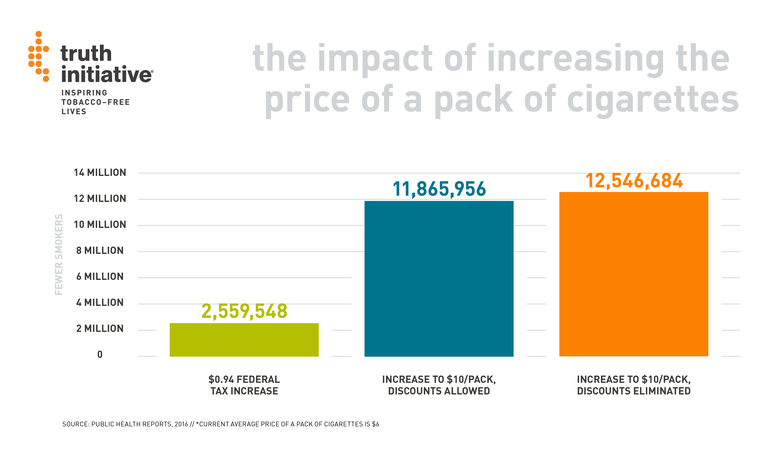 Throughout the month of August, Truth Initiative is highlighting the ways that socioeconomic disparities impact tobacco use.