A report by Truth Initiative® “While You Were Streaming: Tobacco Use Sees a Renormalization in On-Demand Digital Content, Diluting Progress in Broadcast & Theaters,” reveals that 79 percent of the shows most popular with young people aged 15-24 depict smoking prominently. Tobacco use in online streaming content is pervasive, rising and more prominent than in broadcast and cable programming. The findings present an opportunity for streaming content providers to heed the lessons learned from the motion picture industry. Well-documented movie research shows that youth and young adults with high exposure to tobacco imagery are twice as likely to begin smoking as those with less.

For more information, check out the video and read the full report below.

Tobacco use in streaming series such as “Stranger Things,” “House of Cards” and “Orange Is the New Black” is pervasive, rising and more prominent than it is in broadcast content, according to new research from Truth Initiative. 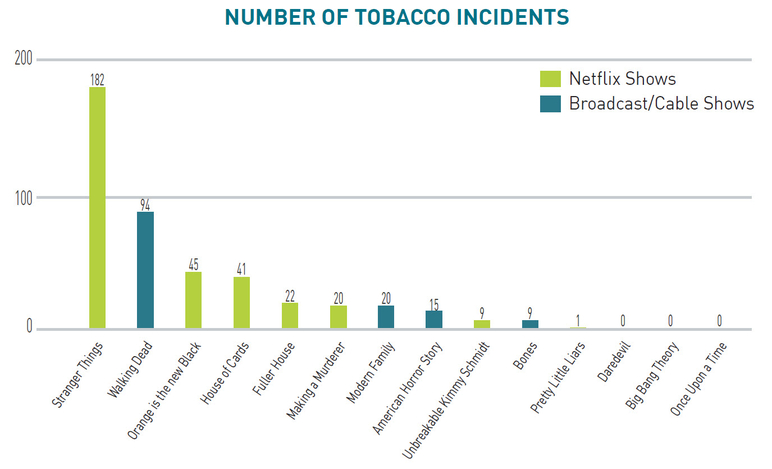 The Netflix hit, which won five Creative Arts Emmy Awards in 2017 and drew an estimated 15.8 million viewers within three days of its second-season launch, features more than 180 tobacco incidents in the 2016 season. It is followed by “Orange is the New Black” (45 incidents) and “House of Cards” (41 incidents). Other Netflix shows analyzed in the research include “Making a Murderer,” “Fuller House,” “Unbreakable Kimmy Schmidt” and “Daredevil.”

“There has been a revolution in television that now encompasses a complex universe including Hulu, Netflix and an emerging world of on-demand platforms,” says Robin Koval, CEO and president of Truth Initiative. “And while everybody was watching, but no one was paying attention, we’ve experienced a pervasive re-emergence of smoking imagery that is glamorizing and renormalizing a deadly habit to millions of impressionable young people. It has to stop.”

The findings raise questions about the responsibility of streaming content providers to heed lessons learned from the motion picture industry, which has responded to the Surgeon General’s conclusion that exposure to smoking on screens causes young people to smoke.

Movies in theaters deliver billions of tobacco impressions to young audiences. Just imagine the harm when smoking streams on screens of all sizes.

The effects of exposure are strongly dose-related. The more tobacco imagery young people view on screen, the more likely they are to become smokers. This frames the alarming findings of the report: kids are seeing much more than we thought.

Although the negative impact of smoking depictions in movies has been studied extensively, very little research has examined smoking in television and streaming content. Preliminary data suggest an emerging threat to a new generation of young Americans.

Researchers at Truth Initiative used a nationally sourced sample of youth and young adults to identify the 14 most popular broadcast and cable TV shows in the age group. The shows were then analyzed for tobacco imagery and the results are surprising: among the sample shows, there were nearly 500 depictions of tobacco.

The seven Netflix shows in the sample contained more tobacco incidents (319) than the seven broadcast and cable television shows (139) studied. 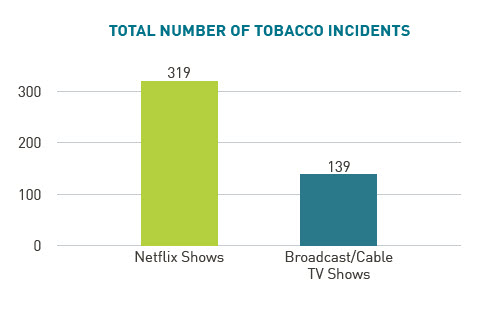 Of the cable shows that won best series Emmy Awards in 2017, both have featured smoking plot points. For example, “Veep” (Best Comedy Series, 2017) has portrayed main character Selina Meyer as an occasional smoker. Additionally, “Big Little Lies” (Best Limited Series, 2017) featured a detective character who plays with a cigarette while observing subjects in the interrogation room, a major narrative device of the show. Other notable broadcasts and cable shows have also featured smoking. Viewers of the 2017 season premiere of “Saturday Night Live” saw host Ryan Gosling smoking. HBO’s hit “Westworld,” which is set in the future, features characters smoking in dramatic scenes, suggesting that even as smoking rates decline dramatically in the real world, smoking will still be normalized behavior in a future so advanced it contains fully lifelike robots.

Researchers working with the University of California, San Francisco (UCSF) this year performed a content analysis of online postings and articles in an attempt to estimate the number of 2015-2016 top-ranking broadcast, cable and streaming shows that may include tobacco use. Results of these analyses indicated that 38 percent of broadcast TV shows, 22 percent of cable TV shows and 54 percent of Amazon, Netflix and Hulu shows sampled were associated with incidents of tobacco in online content.

“It’s really a free-for-all on the streaming side,” says Jono Polansky, a consultant to the UCSF Smokefree Movies project. “Movies in theaters deliver billions of tobacco impressions to young audiences. Just imagine the harm when smoking streams on screens of all sizes.”

THE OUTSIZED IMPACT OF STREAMING

The Truth Initiative findings are troubling in light of the increasing popularity and impact of online streaming content among young people. While viewership of traditional TV among youth and young adults has been decreasing, memberships to paid subscription services, such as Netflix, have been on the rise.

The who, what, where and why of smoking incidents varies across streaming content. Below is a look at how tobacco use is depicted in six popular streaming shows.

Set in the 1980s, this sci-fi series features tobacco use so prominently that viewers have turned to online channels such as Reddit to discuss whether smoking actually symbolizes anything in the show.

ORANGE IS THE NEW BLACK

Cigarettes are a frequent and recurring prop in this show set in a woman’s correctional facility. Primary characters are often featured holding cigarettes as they hold private conversations with each other.

This irreverent and absurdist sitcom set in New York City frequently features outrageous cutaways and non sequiturs and occasionally references smoking. One fan favorite is presented as a music video that includes the lyric “smoke a cigar.”

Frank and Claire Underwood are power players in this show about the dark underbelly of Washington, D.C. Their sheer force of will is a frequent focus of episodes. They are depicted as occasional smokers in the service of showing their control over addiction.

In this reboot of the classic family sitcom from the '80s and '90s, the lead character Danny Tanner is seen smoking in the backyard of the namesake family's house during a private moment.

This documentary explores life in Manitowoc County, Wisconsin, where many of the primary subjects are, themselves, smokers and cigarette use is common.

“What the research shows is that some of the most popular shows that young people are watching and modeling their behavior on, depict smoking at alarming rates,” Koval says.

Young people are particularly susceptible to the influence of smoking images, research shows. Almost all smokers (99 percent) start by age 26. In the U.S., nearly nine out of 10 adult smokers start smoking by age 18.

The findings on the depiction of tobacco use come to light as TV and streaming shows have taken off both in quantity and quality. By one estimate, the number of shows has increased by 137 percent in the last decade alone, and national data indicate U.S. teens and young adults spend an average of 12 to 13 hours per week watching TV.

States and stakeholders in the creative industry have begun to establish ways of working that give policymakers a voice in the process. With tax incentives, state lawmakers have been able to attract producers and therefore bring economic stimulus to their constituents. The Centers for Disease Control and Prevention recommended that states harmonize their public health and economic development strategies by making film production without smoking eligible for tax subsidies and other incentives. Incentivizing creative productions that don’t promote smoking can be productive.

Lessons of the Past

Smoking in media has prompted smoking in society for the last nine decades — despite repeated attempts to shut down this promotional channel.

For the first half of the 20th century, cigarette smoking was commonplace. At its peak in 1965, nearly half (42 percent) of adults smoked cigarettes. Leading men and women in movies and TV casually lighting up on screen, as well as starring in cigarette advertisements was the norm. In the late 1950s and 1960s, researchers and doctors began to sound the alarm: smoking kills.

Throughout the 1960s, policy and public health leaders started to discourage tobacco use by requiring labels on cigarettes to warn of the health harms and airing anti-smoking public service announcements on network TV. But cigarettes were not only widely available and frequently depicted in movies and TV, they were marketed to the general public through radio and television advertisements. In 1971, the Department of Justice took a step toward putting an end to these smoking reminders by banning cigarette advertisements on broadcast media — which, at the time, consisted of radio and TV.

In the 1970s, and for decades thereafter, advertisement bans on TV and radio limited some of the popular and positive depictions of tobacco use. Smoking in movies, however, remained common and cigarettes continued to be portrayed as “cool” and as a way for men to attract women.

Tobacco product placement in movies and tobacco advertisements featuring famous actors functioned to shape culture and make smoking seem glamorous, aspirational and cool. Evidence of tobacco companies’ use of movies and their stars to promote their products dates back to the early days of movies, and tobacco industry documents from as early as the 1920s provide evidence of official financial connections between Big Tobacco and Hollywood.

Concerned about the potentially negative impact of these positive images of smoking in movies, researchers designed studies aimed at better understanding the prevalence and effects of smoking on the big screen. Content analyses of movies dating back to the 1930s indicated tobacco use in movies was very common, even in children’s movies, with estimates of up to 88 percent of top box office movies including smoking.

The lessons that can be drawn from the past are threefold. First, the tobacco and entertainment industries both pursue the same youth market and have persistently found ways to collaborate. Second, no matter how tobacco and tobacco brands get into entertainment for young people, it causes them to start smoking and become addicted smokers. Third, to spare America millions of deaths and billions in health costs, stakeholders must adjust the incentives that shape the entertainment industry’s behavior, so it can and will do the responsible thing. These findings are just the beginning of that process with regard to smoking on all of our screens.

Today, there is no consistent regulation of TV show content. While broadcast and cable TV shows are subject to some content regulations under the Federal Communications Commission, these restrictions are very limited and do not apply to shows created for online streaming platforms.

Millions of young people are repeatedly exposed to tobacco through their TVs and smartphones. There are several common sense measures needed to protect young viewers — those most at risk of starting to smoke — from being bombarded with tobacco imagery proven to promote smoking:

Are video games glamorizing tobacco use?