Health researchers in more than a dozen countries have repeatedly confirmed what United States (U.S.) tobacco companies have known since the late 1920s: movies sell cigarettes. The Centers for Disease Control and Prevention (CDC) estimated in 2014 that movies recruit 6.4 million new underage smokers in the United States. Almost 90% of those who initiate smoking due to onscreen exposure start smoking before age 18, with 2 million of them ultimately dying from tobacco-induced diseases, such as heart disease, lung cancer, stroke, and emphysema. Similarly, Truth Initiative’s recent study (2020) found that youth with high exposure to popular streaming and TV shows containing tobacco images were three times more likely to start vaping compared to their peers with no exposure. Thus, reducing kids’ exposure to onscreen tobacco use will significantly reduce youth initiation of tobacco use.

In 2003 researchers, state Attorneys General, and policymakers put the Motion Picture Association of America (MPA) on notice of the need to eliminate youth exposure to smoking on screen. The MPA represents six major film studios in the United States: Walt Disney Motion Pictures, Paramount Pictures, Sony Pictures Entertainment, Universal City Studios, Warner Brothers Entertainment, and most recently, Netflix. These MPA member studios committed to lowering tobacco exposure among youth and hold different goals for tobacco-free screens than independent movie studios, who are not yet as vocal about their commitment to reducing harmful imagery. Non-MPA movie studios include other production companies not part of the MPA and include large studio with parent companies that are publicly traded and smaller independent studios. Examples of non-MPA member studios include Lions Gate Entertainment, STX Films, and BRON Studios, among many others. In recent years, non-MPA member studios produced approximately the same number of top films with tobacco content as MPA member studios, meaning they have similar audience sizes. Collectively, the film industry has only taken modest steps to reduce and enforce stricter regulations for tobacco imagery in youth-rated (G, PG, PG-13) movies.

Youth with high exposure to popular streaming and TV shows containing tobacco images were three times more likely to start vaping compared to their peers with no exposure.

The COVID-19 pandemic hit the United States in early March 2020 and drastically changed how movies were released and watched. Movie theaters closed their doors at the start of the pandemic, which caused production companies to either postpone movie release, or release films on streaming platforms such as HBO Max, Disney+, and Amazon Prime. This changed the media landscape in a critical way: people were more likely to watch newly released movies on these streaming services than in theaters in 2020. This has important implications on our methodology used for these annual reports. Streaming companies do not make their viewership data publicly available which limits our ability to measure audience exposure and impacts.

Since 2002, the University of California, San Francisco has collaborated with Breathe California to analyze onscreen smoking data in the Breathe California Onscreen Tobacco Database to produce annual reports summarizing tobacco presence in top movies released that year. In 2021, NORC at the University of Chicago joined the collaborative effort, taking over the analysis and reporting role. With all the changes that 2020-21 brought, the research team is taking an opportunity to rethink and revamp methods and approaches. Therefore, this report is a condensed version of previous reports, briefly synthesizing data from the 71 top movies released domestically in 2020 and discusses challenges and new directions for this vital research moving into 2021 and beyond.

We included 71 films for analysis in this annual report. Films were included in our analysis if they made an appearance at least once on one or more Top 10 chart lists. Table 1 shows the breakdown by rating and MPA member studio production company affiliation. Please visit the Smoke Free Media Onscreen Tobacco Database for more details on the films, including film name, release date, company credits, and tobacco measures.

Table 1 Number of top movies released in 2020, by rating and studio type

Total Number of Films with Tobacco by Rating 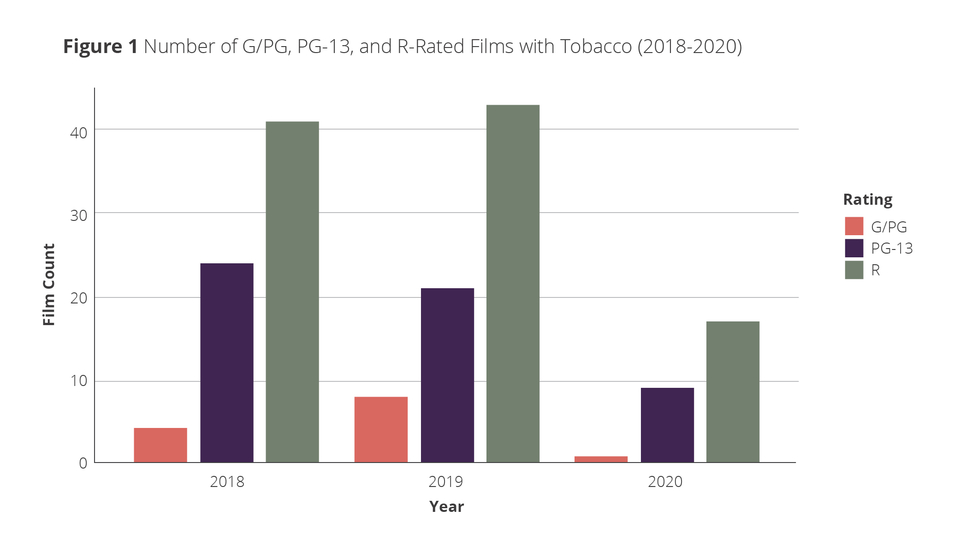 Total Number of Tobacco Incidents in Films by Rating 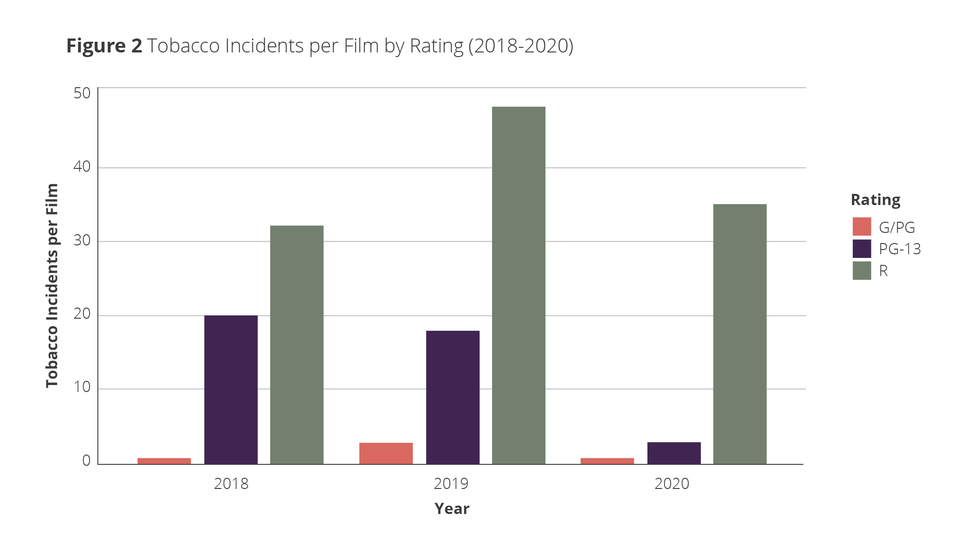 In all prior reports, we have calculated measures of audience tobacco exposure (movie box office revenue /divided by the average theater ticket sale price to estimate the number of viewers) and total tobacco impressions per film (estimate of the total number of viewers multiplied by the total tobacco incidents in the film). However, this calculation for exposure and impressions quickly became obsolete in 2020 since movies were viewed both in theater and on streaming services. Unfortunately, the latter does not release data on how many people watched specific content, so we are unable to estimate audience tobacco exposure or tobacco impressions in this report. We discuss this and other limitations in more detail in the Future Directions section. 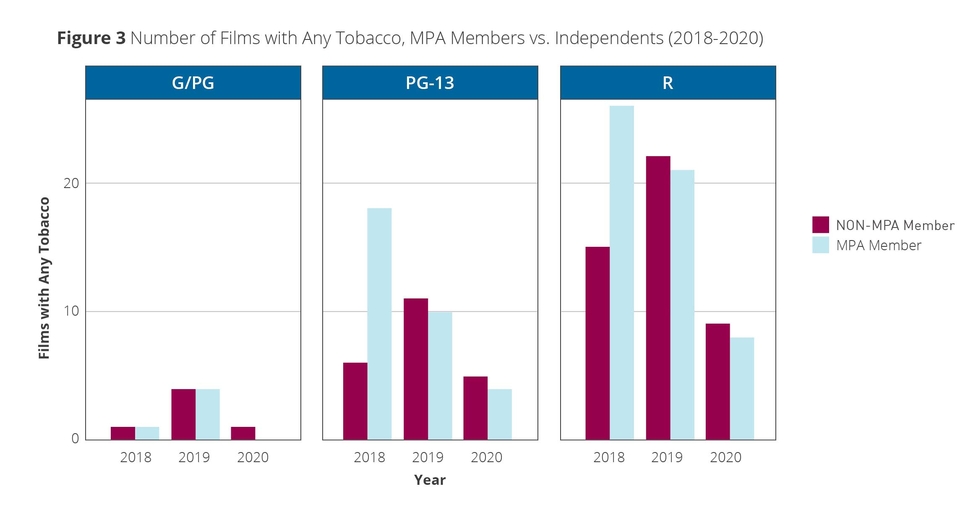 As the tobacco product landscape grows, products such as electronic cigarettes, cigars, and pipe tobacco have made their way into mainstream media, including youth- and R-rated films. In 2020, there were close to 1,000 incidents of tobacco in 71 films, with cigarettes and cigars being the most common combustible tobacco products shown in all movies (Table 3). Cigarettes, cigars, and pipe tobacco products were all present in youth-rated films in 2020, and one PG-rated film in particular, The Personal History of David Copperfield (2020), contained all 13 tobacco incidents observed for this rating group. Perhaps surprisingly, there was only one incident of e-cigarettes in 2020 films, in an R-rated movie, which may serve as an important benchmark for future reports.

COVID-19 and the Introduction of Straight-To-Streaming

Before the start of the US COVID-19 pandemic, new movie releases happened almost exclusively in theaters. From January to March 2020, there were 21 films released only in theaters, with one film released concurrently in theater and on streaming services in February 2020. Movie theaters generally closed their doors as states began implementing various stay-at-home restrictions at the onset of the pandemic. As a response, the industry quickly pivoted and began making their newly released films available on streaming platforms (e.g., HBO Max, Disney+). As a result, there is a sharp decline in the number of movies released only in theaters leading up to March 2020, and from that point forward, options for viewing newly released movies on streaming platforms dominated (Figure 4). 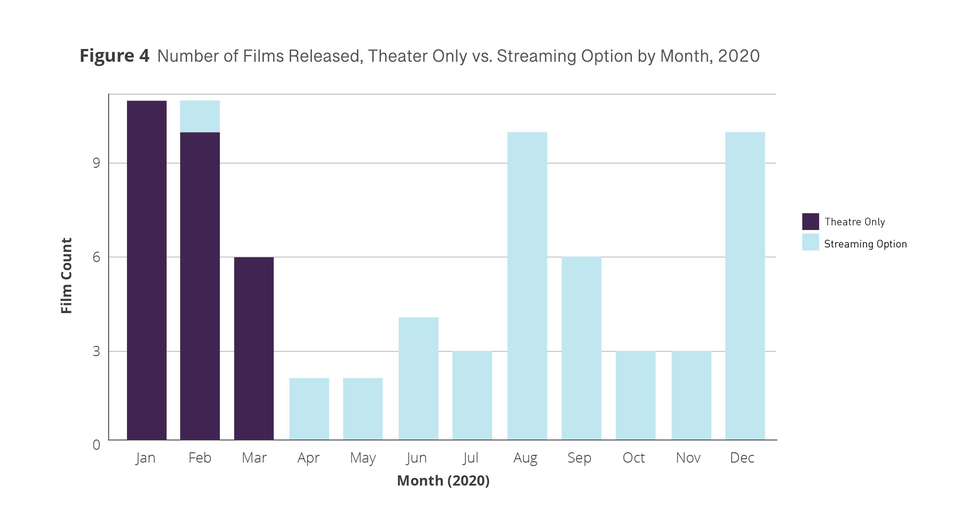 This work started in 2002, with methods documented in full in prior reports. Breathe California staff monitor new movie release schedules, Box Office Weekend forecasts, and top 10 movie forecasts every week. If a movie released appeared on a weekly top 10 list (e.g., Box Office Mojo), the film was selected for screening and coding. Once films are identified and released, one to three Breathe California staff members watch and code the movie in theaters within a few days of the movie’s release. Staff members code the amount of tobacco displayed (incidents), tobacco use portrayal, which character types use tobacco, and location of tobacco use, among other factors. Information on film production details, including media companies, producers, directors, actors, production budgets, and box office results, is obtained from publicly available entertainment industry databases and publications (e.g., IMDB). Completed movie records are reviewed and published on the UCSF Smoke Free Media site, with Breathe California staff adjudicating and updating any discrepancies in the records. NORC at the University of Chicago compiled all the movie records for 2020, analyzed results, and prepared this report funded by Truth Initiative.

A significant challenge presented by the abrupt shift in movie releases and viewing from theater only to streaming and concurrent theater, is the lack of exposure or viewership data available for these streaming services. In years past, the researchers have used metrics including box office revenue and ticket sales as essential measures of top-grossing movies, potential exposure to tobacco use, and tobacco impressions. As a result, our methods under-estimate exposure (since box office revenue and ticket sales would only capture exposure through theater views and not streaming views). Therefore, it is urgent to develop new methodologies to accurately assess top movies released annually across mediums, and new methods to determine youth and population exposure. For example, to assess exposure more accurately for films watched on streaming platforms, researchers could include proxy measures for exposure, such as using the number of subscribers to streaming platforms supplemented by Census data for youth populations. Reinventing and standardizing these exposure measures across different mediums, in theater or on streaming, is critical for this continued research.

Additional transparency in viewership data from production and streaming companies are needed to navigate the barriers brought about by movies released straight-to-streaming. The findings in this report reinforce the need for industry-wide action to ensure that films marketed to youth are not promoting the re-normalization of tobacco, leading to a lifetime of nicotine addiction and premature, preventable death.

Nicotine on demand: While you were streaming report