How African-American leaders are taking on menthol

The tobacco industry has a history of making large financial contributions to African-American groups and political leaders to ally themselves with the black community, its main menthol cigarette customers who they have aggressively targeted for decades.

But while the industry has long relied on these relationships to help guard against regulation, African-American organizations are also leading the call for action by making menthol a part of their national platforms.

One big example: the nation’s oldest and largest grassroots civil rights organization, the National Association for the Advancement of Colored People, adopted a menthol resolution in 2016. The resolution, which NAACP delegates introduced in July and the board ratified in October, supports local and state policy efforts to restrict the sale of menthol cigarettes and other flavored tobacco, and backs bringing all tobacco products under the jurisdiction of the U.S. Food and Drug Administration.

“The NAACP and all of its units are committed to the health and well-being of African-Americans and are particularly concerned about preventing tobacco use among youth,” states the resolution, which also notes that the tobacco industry “has perniciously targeted African Americans with mentholated products.”

The NAACP is following in the footsteps of Delta Sigma Theta Sorority, Inc., which in 2013 became the first African-American organization to adopt a national resolution urging the FDA to ban menthol cigarettes. Both the NAACP and Delta Sigma Theta Sorority were honored for these resolutions when they received the 2016 Karen Bass Visionary Leader in Tobacco Control Award from the African-American Tobacco Control Leadership Council, a Truth Initiative® partner.

“When we look back on the history of the pervasive presence of the tobacco industry in the African-American community and the growing work of African-American-focused tobacco control, we see [these resolutions] as a pivotal point in truly reaching and engaging our people to get deadly menthol cigarettes and other flavored tobacco products out of our neighborhoods,” AATCLC founding member Dr. Valerie Yerger said at the award ceremony in March at the National Conference on Tobacco or Health.

In 2016, Truth Initiative joined the AATCLC in an open letter to former President Barack Obama urging the FDA to ban menthol. Nearly 90 percent of African-American smokers aged 12 years and older use menthol cigarettes, which are easier to smoke and harder to quit. The tobacco industry has a long history of targeting the African-American community with menthol cigarette marketing, including free cigarette-giveaways, cheaper cigarette prices and provocative advertising.

In the absence of FDA action on menthol cigarettes, other public health groups, tobacco control advocates and community members are stepping up efforts to restrict the sale of these products. To spread the truth about menthol, we’ve summarized the key facts for you to know, use and share. 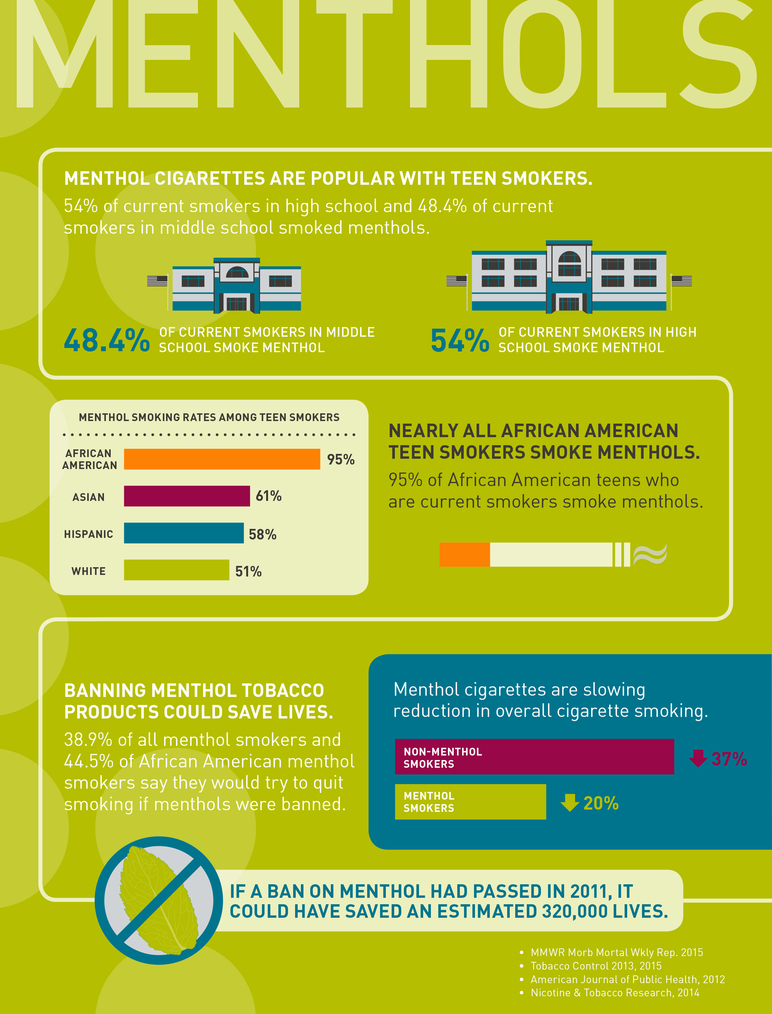