The chemical compound menthol makes cigarettes easier to smoke and harder to quit. Menthol creates a cooling effect, reduces the harshness of cigarette smoke, and suppresses coughing. Those effects may make menthol cigarettes more appealing to young, inexperienced smokers, and research shows that they are more likely to addict youth. Because African Americans use menthol cigarettes at higher rates, menthol also contributes to health inequities. 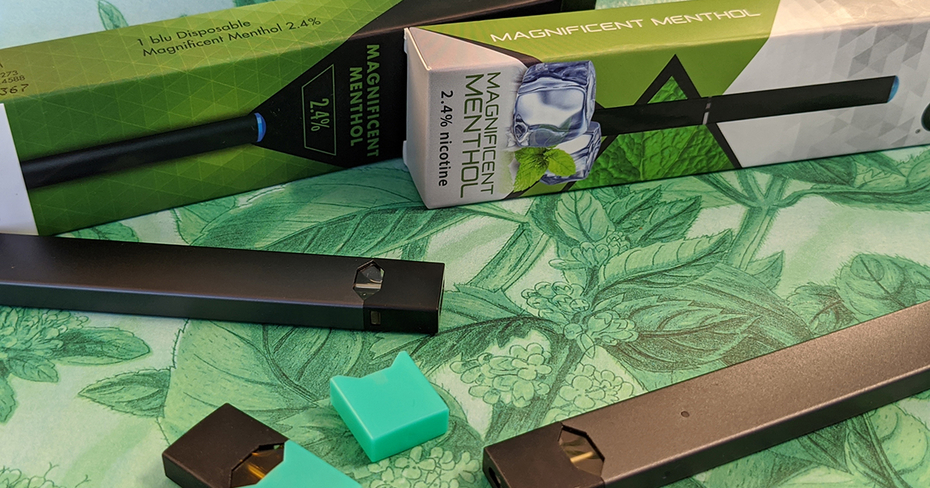 Although the FDA effectively banned certain cartridge-based flavored e-cigarettes products in 2020, menthol was one of the many exemptions to the policy.

PATTERNS OF USE IN THE U.S. 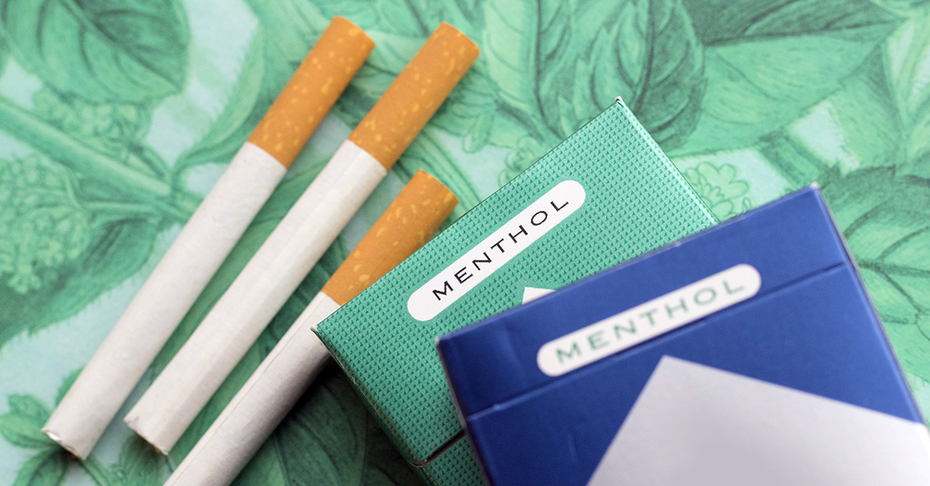 Young people use menthol tobacco products, including cigarettes and e-cigarettes, at disproportionally high rates, which could facilitate nicotine addiction. 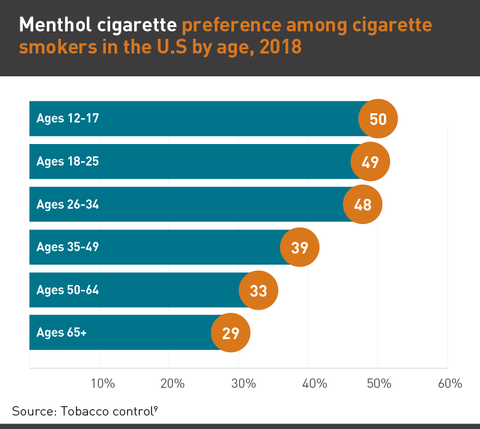 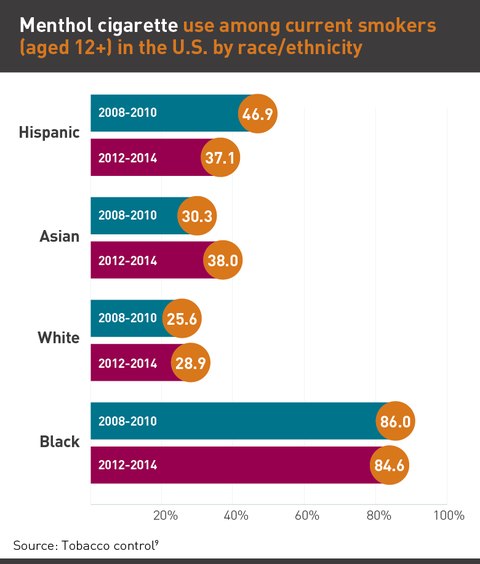 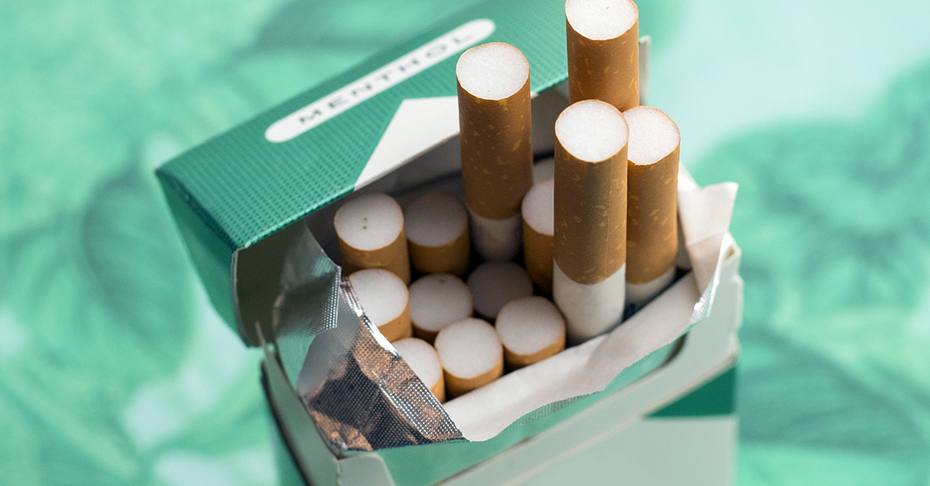 Menthol cigarettes offer no health benefit to smokers, and, in fact, are easier to start smoking and more difficult to quit than regular cigarettes.

MARKETING IN THE U.S.

While many localities have prohibited flavored tobacco products in some way, most of these exclude menthol, mint or wintergreen. However, several localities do include menthol in their flavor bans. As of December 31, 2021, 100 jurisdictions have fully comprehensive policies that prohibit sales of all types of flavors across all products, including menthol/mint/wintergreen tobacco products, at all retailers. Despite research showing that menthol cigarettes are easier to start smoking and harder to quit, only 2.17% of the U.S. population is covered by a comprehensive state or local flavored tobacco sales restriction.

Research provides strong evidence that local policies restricting flavored tobacco products reduce availability, marketing, and sales of such products — some of the immediate intended outcomes of the legislation, according to Truth Initiative research published in Nicotine & Tobacco Research.

At the local, state and national levels, the tobacco industry has worked hard to undermine government efforts to restrict the availability of menthol tobacco products. In California, a bill prohibiting the sale of most flavored tobacco products was signed into law in August 2020, despite heavy opposition from the tobacco industry. In fact, the industry implemented a media blitz of television and social media ads, arguing the law would increase racial profiling by law enforcement. The tobacco industry then was able to gather enough signatures to seek a referendum, which Californians will vote on in November 2022. As of December 31, 2021, the political action committee to overturn the law has contributed more than $21 million to the campaign, including $10.3 million from R.J. Reynolds and $9.8 million from Philip Morris.

The industry often cites a concern that menthol bans will lead to a market for dangerous illicit trade, despite sparse and overstated evidence to support that concern. Research shows that illicit menthol cigarette purchases were low following menthol bans in seven Canadian provinces. The tobacco industry has also attempted to spread fear that menthol bans unfairly target African Americans and would lead to further criminalization of the community. R.J. Reynolds, also the maker of the leading menthol cigarette brand Newport, recruited prominent Black leaders, including civil rights activist Rev. Al Sharpton, to host town halls across the country on the subject. The public health community criticized these events as deceptive and exploitative.

The tobacco industry also opposes menthol sales restrictions by warning of severe economic losses for communities. A case study of Minneapolis and Saint Paul, Minnesota co-authored by Truth Initiative researchers shows that restricting menthol cigarette sales from convenience stores in the two cities would result in projected annual profit losses of about $6M for Minneapolis and $4M for Saint Paul — contrasting sharply with tobacco industry estimates of losses of at least six times greater. Also, the number of tobacco retailers in both cities remained largely the same as it was prior to the ban, suggesting economic stability. The Minnesota examples suggest that it is possible to successfully implement flavor regulations without an overwhelmingly negative economic impact for tobacco retailers.

Consistent with a vision of a future where tobacco is a thing of the past, Truth Initiative supports the following policies regarding menthol in tobacco products:

These actions are especially urgent because the FDA has repeatedly failed to act, despite long-standing, overwhelming evidence that a menthol ban would benefit public health. 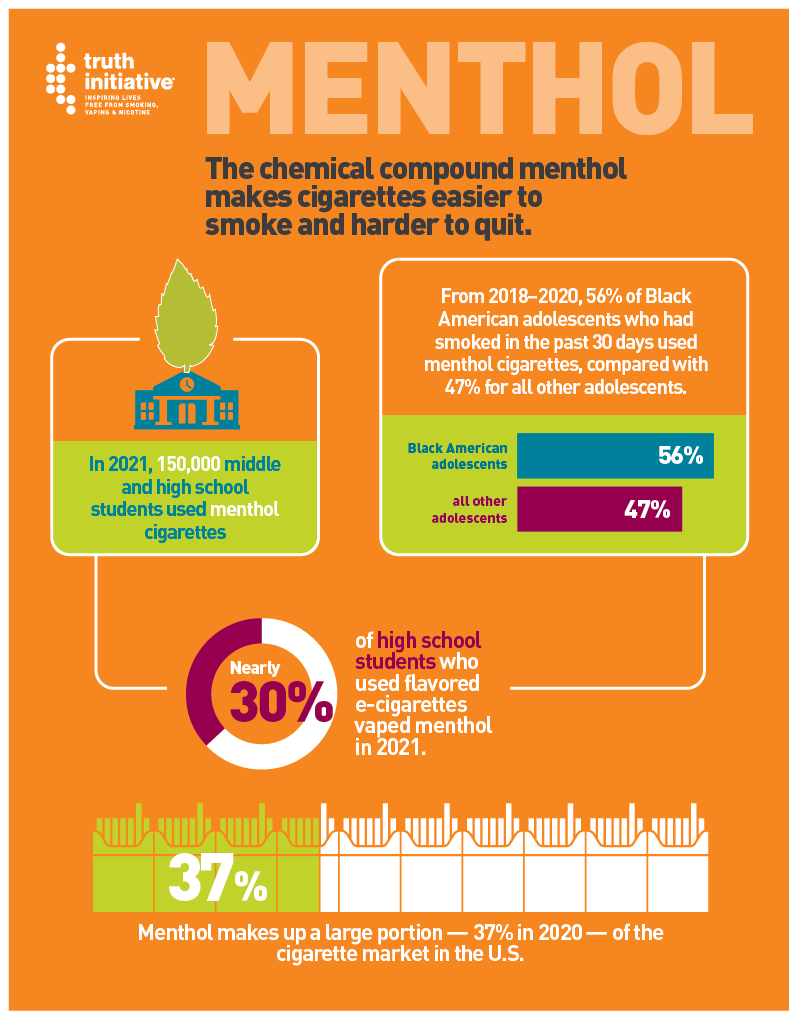