Graphic Cigarette Warnings Proposed by FDA Are Long Overdue, But Agency Must Meet March 2020 Deadline to Finalize Them

The large, graphic cigarette health warnings proposed today by the U.S. Food and Drug Administration are a critical and long-overdue step forward in the nation’s battle against tobacco use – the number one cause of preventable death. The new graphic warnings are a dramatic improvement over the current text-only warnings that have become stale and unnoticed, they are supported by extensive scientific evidence, and they will help the United States catch up to the 120-plus countries that have adopted this best-practice strategy to reduce tobacco use and save lives.

Our organizations look forward to carefully reviewing both the text and images of the proposed warnings and providing comment to the FDA.  Our nation must seize this opportunity to implement strong and effective cigarette warnings that improve understanding of the deadly consequences of smoking among both smokers and non-smokers, especially among our kids.

As it has been 10 years since Congress first mandated graphic cigarette warnings when it passed the 2009 Family Smoking Prevention and Tobacco Control Act, it is especially critical that the FDA move as quickly as possible to finalize and implement the these warnings. The FDA must meet the court’s deadline to issue a final rule by March 15, 2020, and then vigorously defend the graphic warnings against inevitable legal challenges by the tobacco industry. The tobacco industry cannot be allowed to further delay these necessary warnings that show and tell the truth about the deadly consequences of smoking. We cannot afford more delays – not when tobacco use still kills half a million Americans and costs the nation $170 billion in health care expenses each year. The FDA’s proposed rule makes a comprehensive and compelling case for the graphic warnings that show they stand on firm scientific and legal ground.

The FDA faced a court-ordered deadline of today to issue a proposed rule requiring the graphic warnings as a result of a successful lawsuit filed by our public health and medical organizations and several individual pediatricians in October 2016. Our lawsuit sought to force the FDA to comply with provisions of the 2009 Family Smoking Prevention and Tobacco Control Act, which required graphic warnings covering the top half of the front and back of cigarette packs and 20 percent of cigarette advertising.

In a September 5, 2018 ruling, Judge Indira Talwani of the U.S. District Court for the District of Massachusetts ruled in favor of our health groups, finding that the FDA “unlawfully withheld” and “unreasonably delayed” agency action to require the graphic warnings. 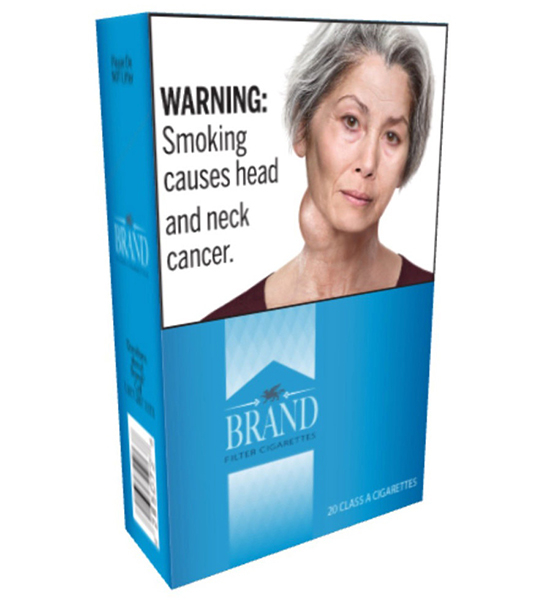 Cigarette graphic warning labels in the US

The graphic warnings are a dramatic improvement over the current text-only warnings, which haven’t been updated since 1984 and are now barely noticed by smokers or kids thinking about smoking. They are supported by extensive scientific evidence showing that graphic warnings are far more effective at communicating the health risks of smoking than text-only warnings. And they will help the United States catch up to the 120 countries that have adopted this best-practice strategy to reduce tobacco use and save lives.

The 2009 Tobacco Control Act required graphic warnings covering the top half of the front and back of cigarette packs and 20 percent of cigarette advertising and gave the FDA until June 22, 2011, to issue a final rule requiring such warnings. While the FDA met that deadline, the specific graphic warnings required by the FDA were struck down in August 2012 by a three-judge panel of the U.S. Court of Appeals for the D.C. Circuit, which ruled 2-1 that the proposed warnings violated the First Amendment. That ruling only applied to the specific images proposed by the FDA and did not address the law’s underlying requirement.

Ruling in a separate case in March 2012, the U.S. Court of Appeals for the Sixth Circuit upheld the law’s requirement for graphic warnings, finding that this provision did not violate the First Amendment. That court found the graphic warnings “are reasonably related to the government’s interest in preventing consumer deception and are therefore constitutional.” The U.S. Supreme Court declined to hear a tobacco industry appeal of this ruling.

Taken together, these two federal court decisions mean the FDA is still legally obligated to require graphic health warnings, and the agency is free to use different images than those struck down by the D.C. Circuit in 2012. The FDA stated in March 2013 that it planned to issue a new rule requiring graphic warnings, but failed to do so before today.

At least 120 countries and jurisdictions now require graphic cigarette warnings. Prior to 2009, when Congress passed the Tobacco Control Act, only 18 countries required graphic warnings, showing how far behind the rest of the world the U.S has fallen over the past 10 years.

​The latest news from Truth Initiative