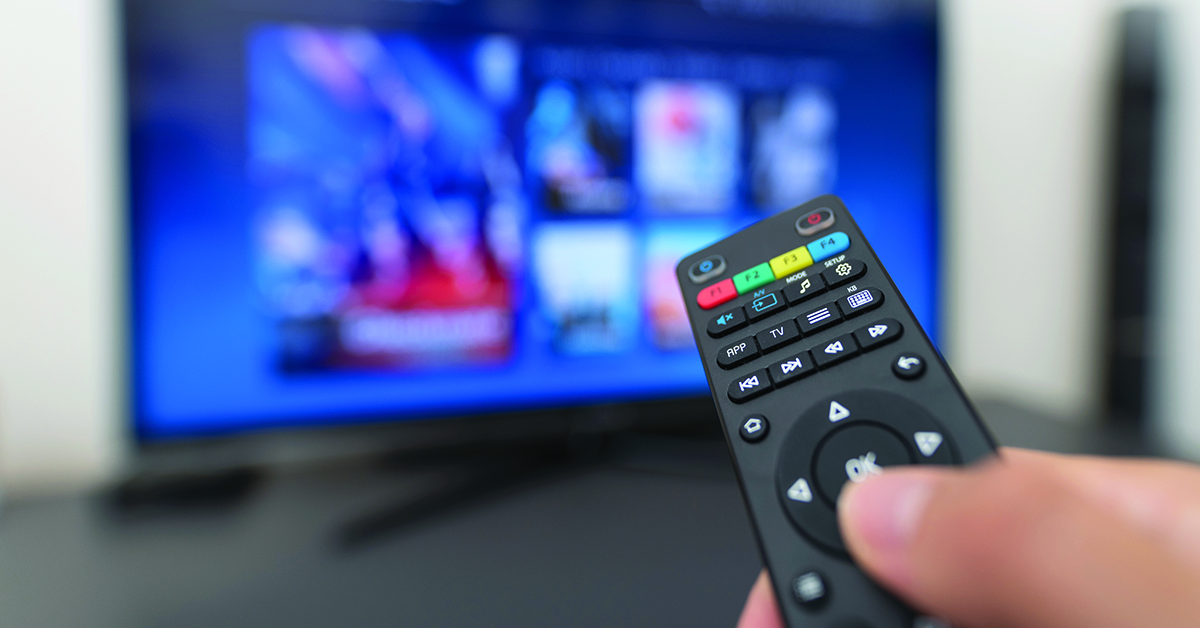 While you were streaming: Smoking on demand 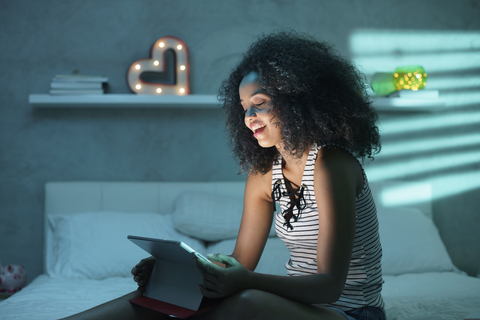 Smoking on the small screen has gone from common to nearly unavoidable, as popular programs like “Stranger Things,” “Orange Is the New Black” and “Modern Family” increasingly show images of tobacco and portray characters who smoke.

The popularity of streaming combined with the pervasive rise of smoking in episodic content points to an emerging threat to a new generation of Young Americans. Truth Initiative® first reported on this issue in 2018 with the study “While You Were Streaming: Tobacco Use Sees a Renormalization in On-Demand Digital Content, Diluting Progress in Broadcast & Theaters.” In the year since then, the danger has only grown.

Our prior analysis found that Netflix programs depicted more smoking imagery than broadcast shows. In 2019, Truth Initiative researchers re-analyzed tobacco content in the same episodic programming most popular with young people between 15 and 24 years old and found that Netflix once again topped the list with nearly triple the number of tobacco instances (866) compared with the prior year (299). Broadcast/cable programming showed nearly two and a half times more tobacco imagery than the previous year. Overall, 92% of the shows analyzed contained images of tobacco in the 2016-17 season, up from 79% in the 2015-16 season.

Based on estimated viewership of these programs, results suggest that approximately 28 million young people were exposed to tobacco through television and streaming programs in these most popular shows alone. That exposure is a significant public health concern because viewing tobacco use in on-screen entertainment media is a critical factor associated with young people starting to smoke. The U.S. surgeon general found that those with higher levels of exposure to tobacco use in movies are twice as likely to smoke compared with those with less exposure.1 Further, analysis of peer-reviewed studies estimates that exposure to tobacco use in movies is responsible for 37% of smoking initiation among young smokers.

While smoking in TV programs has not been studied as extensively as tobacco imagery in movies, it is reasonable to conclude a similar harmful impact is possible. The rise of online streaming platforms has also created more opportunities for exposure to tobacco imagery. According to the Pew Research Center, 61% of young adults report online streaming services as the primary mechanism for viewing episodic programming. It is also possible that the ability to watch multiple episodes at a time (“binge watching”) may even intensify the impact of exposure.

How researchers selected and analyzed the shows

Truth Initiative researchers identified the most popular episodic programs through an online survey of 750 youth and young adults between the ages of 15 and 24 and found Netflix to be the most commonly watched streaming channel.

The following Netflix programs were selected by popularity according to survey responses:

While Netflix is one of several streaming platforms that produce original content, including Hulu and Amazon, the most popular streaming shows among survey respondents were Netflix programs. Researchers also identified the most popular programs airing on broadcast and cable TV among youth and young adults and included the following in the sample:

Tobacco use in episodic programming is rising.

Tobacco imagery is increasing on the small screen in two key ways: the number of shows featuring tobacco images and the amount of depictions in each show. 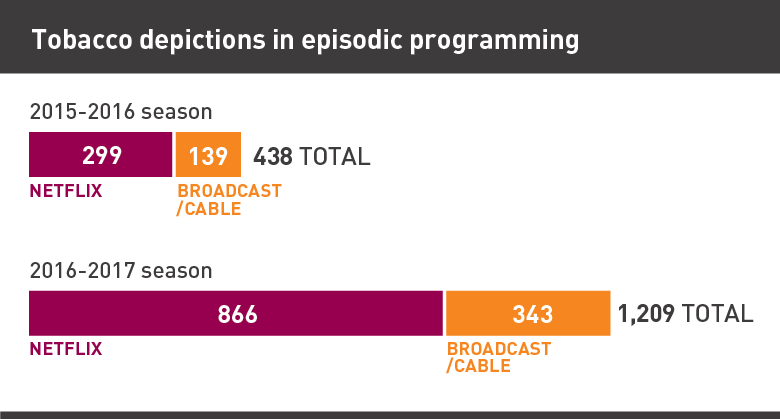 In both the previous and current analysis, Netflix programs continued to display much more tobacco than broadcast or cable. For both the 2015-16 and 2016-17 seasons, episodic programming on Netflix had a greater total number of tobacco depictions than programs aired on broadcast or cable TV, with “Stranger Things” continuing to show the most tobacco overall. Researchers found that 100% of “Stranger Things” episodes coded included tobacco.

Netflix showed 190%, or nearly three times more tobacco in 2016-17. Even when excluding the 2016-17 season of “Unbreakable Kimmy Schmidt,” which had a large number of tobacco depictions due to several scenes in a convenience store prominently featuring a cigarette “power wall” in a single episode, there was still a 92% increase in the number of tobacco depictions from 2015-16 to 2016-17 in the sample of episodic programming from Netflix.

While Netflix is the focus of this analysis because it is the platform for young people’s favorite streaming shows, it should be noted that the proliferation of tobacco imagery is not limited to Netflix. For example, Amazon’s award-winning “The Marvelous Mrs. Maisel” portrays main characters smoking many times throughout its two seasons, and Hulu’s “Gap Year” features a character who frequently uses cigarettes.

The number of tobacco depictions in the sample of episodic programming aired on broadcast or cable TV increased by close to 150%, or two and a half times, between the two seasons. 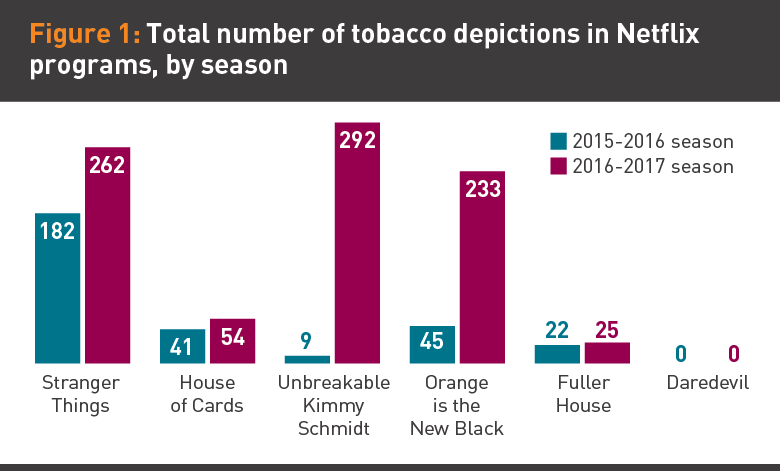 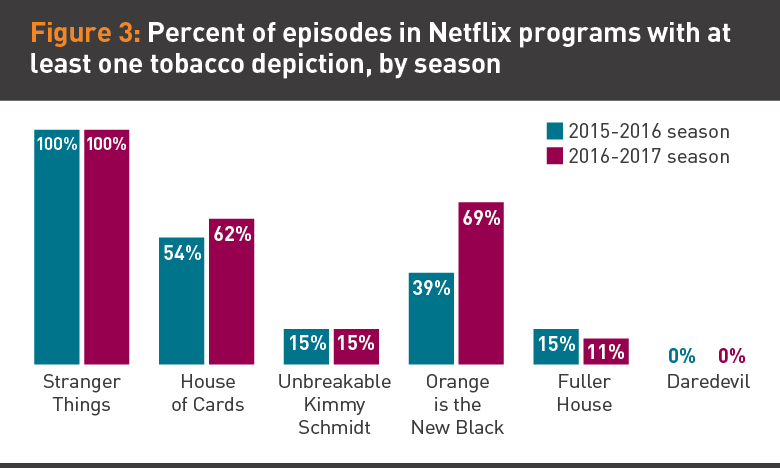 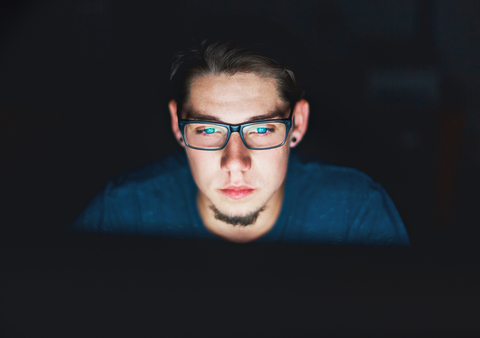 Unfortunately, in the year since our previous report was released, tobacco on the small screen has more than doubled. Despite tobacco advertising limitations, an estimated 28 million young people saw tobacco on their screen, and with more than 200 tobacco incidents in programs rated TV-Y7 and TV-PG, the message is coming through in shows deemed appropriate for young audiences. The stakes are unacceptably high: we know that tobacco depictions in entertainment have a relationship to smoking. As streaming continues to become the norm for video content viewing and the industry expands with new offerings — including the upcoming Disney+, Apple TV+ and a new joint service from Discovery and BBC, as well as new superhero genre streaming service DC Universe, among others — it is critical that reasonable guidelines be put into practice.

We continue to call for action we know can make a difference, including:

Streaming content providers should heed the lessons learned from the motion picture industry, which has responded to the surgeon general’s conclusion that exposure to smoking on screens causes young people to smoke. Although studios need to do more to strengthen their policies, all six major studios — Comcast, Disney, Fox, Sony, Time Warner and Viacom — have adopted formal strategies to reduce tobacco imagery in movies. The most successful major studio is Disney, which adopted its first policy discouraging tobacco imagery in 2005 and strengthened it in 2016, when it pledged that tobacco use would not appear in its youth-rated movies. Since 2017, Disney has been the only major studio that has not portrayed tobacco in youth-rated films, according to Smokefree Movies at the University of California San Francisco.

While it is reasonable to conclude that exposure to tobacco use in TV has an impact on smoking behavior similar to tobacco depictions in movies, further research would be valuable to fully understand this effect given the ubiquity of TV and streaming video content. Researchers must carefully monitor programming, particularly those on streaming platforms, since the number of these programs continues to multiply.

Surveillance should also include documentation of the directors, producers, distributors and carriers of programs that include tobacco depictions and hold them accountable. Additionally, although the number of e-cigarettes in selected episodic programming was low, we suspect that their depictions will become more common given their growing popularity in recent years and recommend careful, further monitoring of programs for all products. We cannot allow young people, who are already the most vulnerable to initiate smoking, to continue to be inundated with tobacco imagery.

What can streaming services do about exposing youth to on-screen smoking?